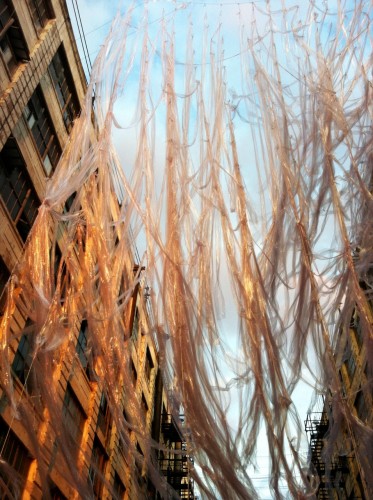 Courtesy of CO
Weightless Pull designed by CO was part of Public Summer 2011 at Industry City. The installation temporarily transformed a once narrow and empty passageway into a lively vertical and depending on the wind horizontal sculptural environment.
Constructed of plastic wrap and nylon rope (there were over 600 different knots), CO’s design focused on geometry fields and linear systems, mechanics simple intuitive systems that are natural to the chosen materials and geometry, and materials that are repeatable, reusable, and economically sustainable.

ABSTRACT
Weightless Pull is an experiment with scale and fields. It’s final state is a large permeable wall suspended and tethered between two warehouse buildings in Industry City Brooklyn. The design made from rope and plastic celebrates the monumental scale of the site stretching 80′ high to the roof of the adjacent buildings. A 80′x30′ field of 18,000 LF of plastic is pulled weightlessly in the wind creating a dynamic volume. 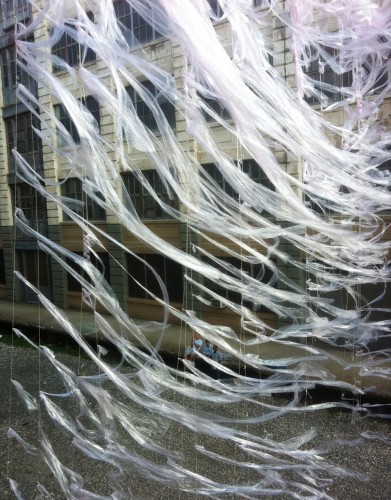 Courtesy of CO
INTRODUCTION
SCALE & SITE
The scale of the space is epic. The narrow vertical space is the primary driver for design.
GEOMETRY
Monumental scale is only enhanced by a repetitive field. The design was envisioned as a linear vertical field, secured from the roof and suspended between the two buildings.
MECHANICS, DESIGN DEVELOPMENT & ANTI-GRAVITY
The initial design intent was to create a gravity field and hanging elements, soaring overhead at different heights and coming down to the ground, emphasizing the verticality of the space. Onsite conditions proved in this case that
WIND > GRAVITY
As designers with science and math backgrounds, we have strong interest in working with intuitive systems that work with materials naturally. In initial testing, our vertical elements, made from enormous lengths of plastic wrap, acted more like sails than weights. 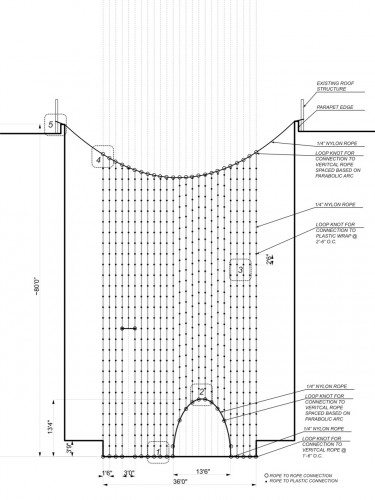 Courtesy of CO
Because we wanted to be true to the mechanics of the space, we chose in the end not to fight the wind, but work with it. The space is truly weightless and so the design developed from a gravity field to a wind field, being pulled not down by gravity, but pulled horizontally by wind. A volume is created by the blowing out of long horizontal lengths of plastic rising from the ground to 80′ above at the height of the surrounding buildings.
MATERIALS
The enormous scale of the site and concept of the field requires a large quantity of repetitive materials. We ended up using
18,000 LF of plastic wrap, generously donated by Materials for the Arts, 3,000 LF of 1/4″ nylon rope, tied in over 600 different knots. The nylon rope served as our structural base while the plastic wrap became the main elements of the field blowing nearly straight out horizontally in the wind.
METHODS
To create this vertical wind field, 1/4″ nylon rope was secured to posts on both roofs, 28 vertical strands of rope were suspended and tied to another horizontal at the base which was secured into the ground with aluminum stakes. These ropes were held in high tension to create the pure verticals. From these vertical ropes, a clear film of plastic wrap was attached. Various knot details were called on to achieve different securing functions between connections.

Courtesy of CO
Hung from a catenary curve and resolving into an arch at ground, each rope was pre-fabricated with knots tied based on a predefined geometry.
Each knot was labeled with the appropriate length of plastic wrap to be attached based on a designed volume of the field.
The key to construction – a key we discovered only after testing – was never to let the system touch the ground – the construction process had to be just as weightless as the design itself.
Construction took place on a rigged pulley system. The rope was pre-assembled, and the entire system was hoisted up starting slightly off the ground. The entire system was systematically raised as the plastic wrap was being tied on at every 2′-6″ of vertical length.
RESULTS
The results were both strong and ephemeral, capturing the power of wind in both scale and sound and the verticality of the space through ropes pulled down in high tension. The initial imagery of something close to a suspended waterfall was captured in the dynamic flow o the plastic as well as the sound of it rustling in the breeze.
CONCLUSIONS
The design build experience is one which demands constant on the spot decision making. For us, working with the site conditions and being honest about the mechanics in the field (high winds and material constraints) led to beautiful results. We are left recognizing that architecture is truly an experiment, and that we are slowly learning the laws of its nature. 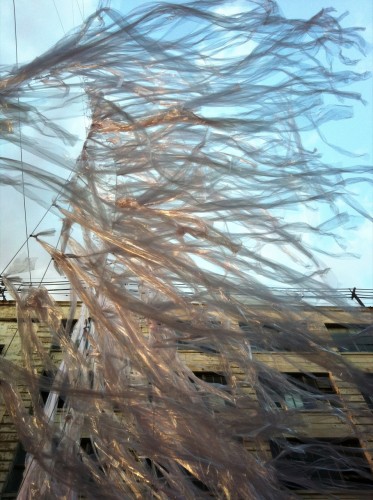 Courtesy of CO
THANKS
Superfront, headed by Mitch McEwen, with support from John Hartman of Freecell and Sarah Towles, served as our generous design counsel and along with support from Industry City gave us an incredible space to explore. They gave us the chance as young designers to experiment with the design build experience, an experience that has really allowed us to grow and influence our future design process. We remain so grateful for the chance to play and participate in the dialogue Superfront has begun.
BIBLIOGRAPHY
Our design philosophy stems from a multidisciplinary approach to architecture and design. Before focusing on Architecture, Christina studied Astronomy and Philosophy, and Naomi studied Mathematics and Art. Upon graduating with Masters in Architecture from The Graduate School of Architecture, Planning and Preservation at Columbia University, Christina Ciardullo and Naomi Ocko founded CO, a collaborative research studio to explore their combined interest in fields, networks, systems, circulation, and tension.
Recently our work has been featured as
Runner Up, Figment’s City of Dreams Pavilion, Summer 2011
Runner Up, TEX FAB’s REPEAT Competition, Fall 2011