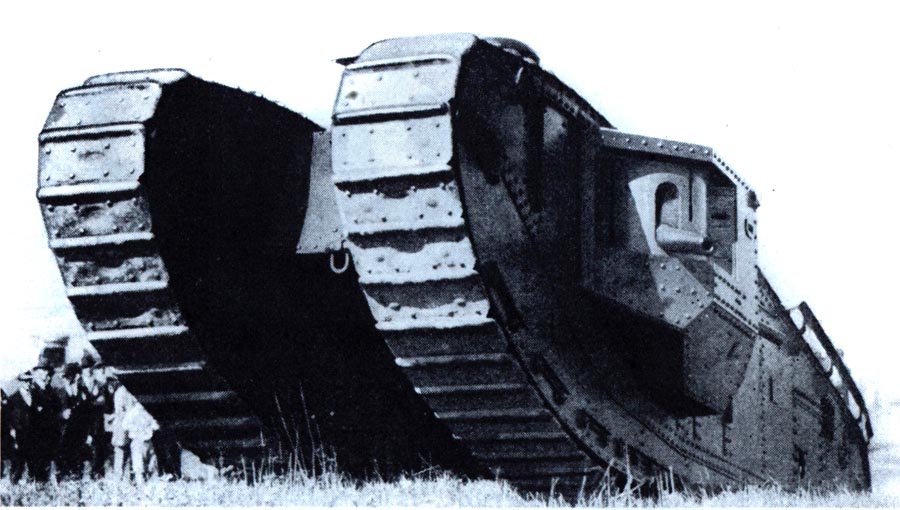 Utmost Intimidation: The Power to Terrify - the First World War Tanks In the first part of this series we saw some strangely-shaped tank offerings from their first conception to real pre-WW1 production. it was perhaps the most fascinating period in tank history as engineering was not "cast in stone" yet and the resulting shapes were wildly unpredictable. It was a time of experimentation, shifting ideas and prototype flux. Now we come to the point in history when all these frightening devices had a chance to prove what they are capable of... And did they ever prove it! (in a sinister "number of casualties" way)

(left: the 1904 David Roberts ‘crawler track’ seen on ‘Hornsby Steam Crawler Track Tractor’. right: “Dreadnought” 3D art by Matt Wood & Julian Holtom) "Steam Mastodons" in the Canadian Prairies The beginnings of enormous steam tanks can be traced to the humble steam tractors widely manufactured and used by the end of 19th century. "Humble", that is, if you do not consider truly monstrous in size tractors from British tractor maker Marshall, Sons & Company. This company was in business since 1848, making its first tractor in 1907 and now looking for new markets in Western Canada. Winnipeg, Manitoba, and Saskatoon, Saskatchewan got the first taste of these grandiose plans: 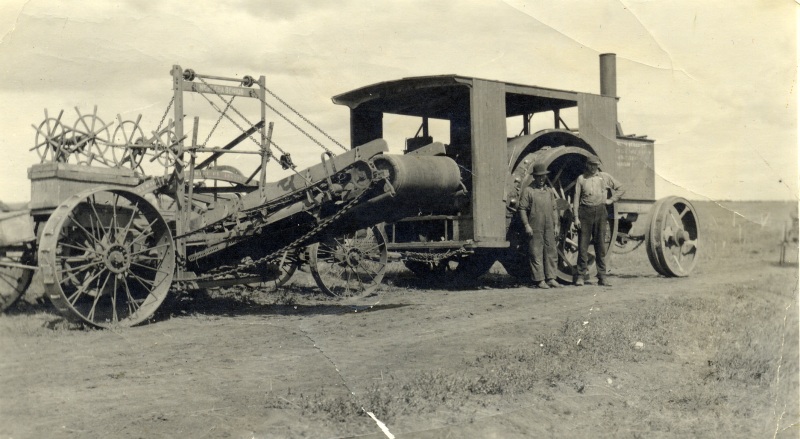 (image via) Titled "Dreadnaughts of the Prairies" the company promoted its "British Colonial Tractors" with the slogan, "Built like a Battleship, Runs Like a Watch." - more info Enter American Steam Powered Tractor, All Dressed Up Americans were one of the first to think of steam powered tractor as a great chassis for a military "land ship", or a "tank". Here we see The American Steam Tank from 1918: 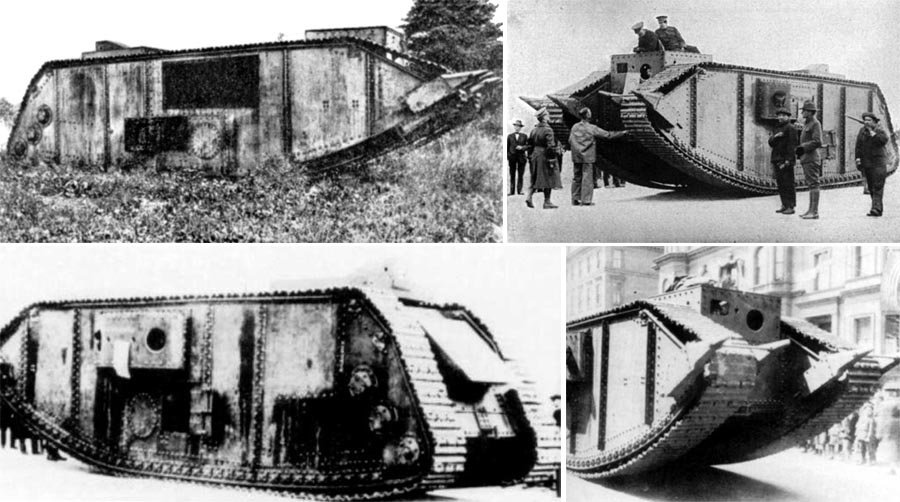 (images via) This was the heaviest ready-for-combat tank of WWI, "The America". Some specialists cite glaring problems with this tank, for example, "a stray shell would have ignited the kerosene stores, and exploded the steam-chambers scalding to death everyone inside". The Steam Tank, however, was a step above the Tsar Tank in that it did not completely fail. It was ready to be sent to the battlefields... equipped with a flamethrower! This gigantic beast was similar in shape to the classic British "lozenge-shaped tanks", except it was running on steam and sporting a flamethrower... Er, did we mention it had a flamethrower? Well, this could be just a rumor: "...the flamethrower was eventually placed in a small turret on top of the cab - yet there is no photographic proof this ever took place".

(image credit: State Archives of North Carolina, click to enlarge) Named "Steam Tank, Tracklaying" it was built by the Army Corps of Engineers in conjunction with Stanley Steamer (the makers of the Stanley Steamer automobile) - and could also act as a battering ram if needed. "Accounts state that this tank arrived in France in 1918, however, the war ended before any meaningful tests could be carried out." Best's Track Machine, Model 75 Build by an American citizen named Best in 1917, this military machine was looked favorably upon by the U.S. Army command (it ordered 50 of these vehicles in one 1917 year):

Here is a harrowing encounter on a narrow street (on the left is the original version of the Holt Steam Tractor): 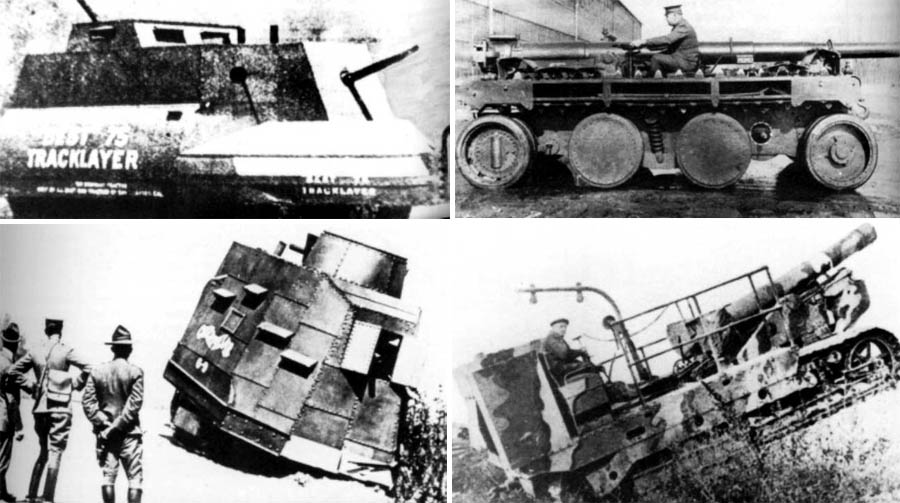 (images via) There were a lot of interesting armored vehicles based on the 1905 Holt Steam Tractor chassis (seen above left). On the right are some bizarre Christie SPGs prototypes. Speaking about Christie, these were unusually tracked vehicles designed by J. Walter Christie - here is the M1919:

(image via) One of the Holt tractor conversions was the Holt gas-electric hybrid - see a good model of it here. "It had a crew of six and used a Holt four-cylinder motor to turn a generator in order to power two electric track motors". One problem, it looks really ugly (which is probably not a problem for a tank but rather an asset). Shown below is the Holt one-man tank prototype:

(left image via) Right image above: this is even more interesting Steam Wheel Tank (from 1916-1917) which is a throwback to the big-wheel designs idea:

(images via) It was also referred to as "the three-wheeled steam tank", "the Holt Steam Tank" and the "Holt 150 Ton Field Monitor". The Steam Wheel Tank was designed on the basis of the early British "Big Wheel" Landships from 1915. It also resembled the German "Treffas-Wagen" of 1917. Speaking about landships, there were designs proposing linking two or even three such machines together, essentially building a tracked armored train! -

The British Side of Things We already mentioned classic British "lozenge-shaped tanks with a kerosene engine". These were Mark I tanks: the British Army and the world's first combat tanks. "The Mark I entered service in August 1916, and was first used in action on the morning of 15 September 1916 during the Battle of Flers-Courcelette, of the Somme Offensive... It was the first vehicle to be named "tank" (partly to maintain secrecy and to disguise its true purpose). It could definitely cross trenches, thus fulfilling Winston Churchill's requirements that we mentioned in the first part of this series. 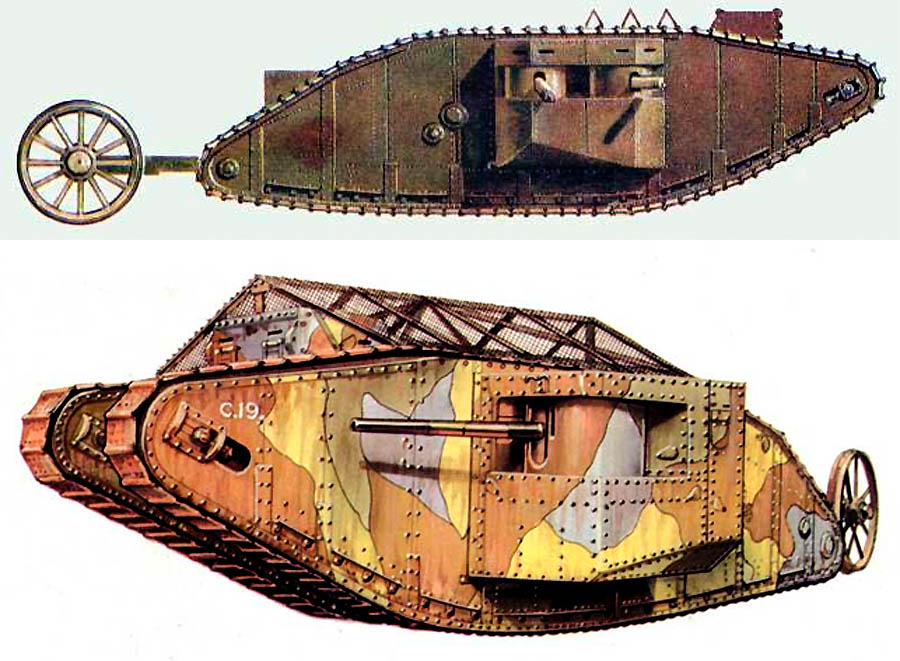 (images via) Here is a good crowd shot of the MK-4: 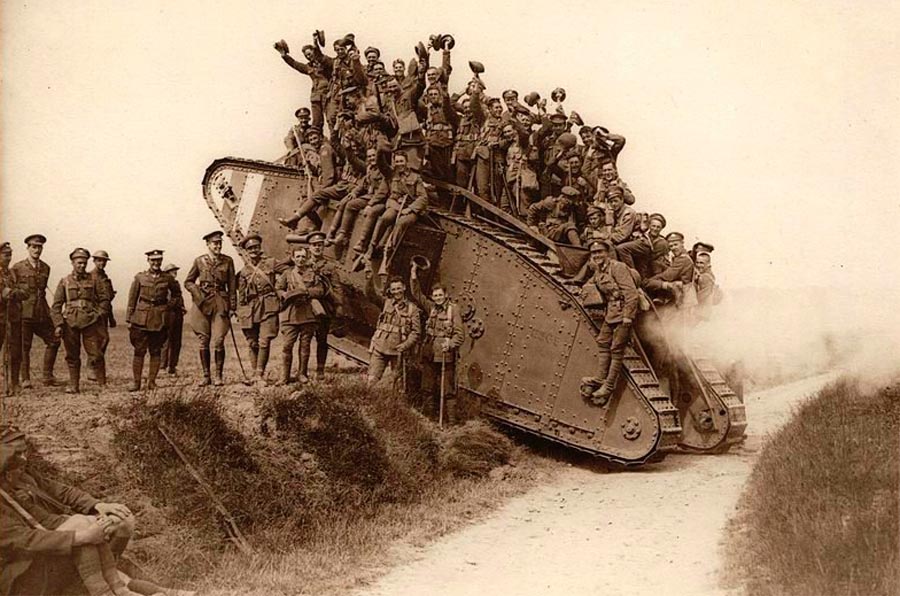 (image via, courtesy Roger Todd) The British Mark IV tank, 1916 - truly a landship, rising over the trenches as though carried by the ocean waves! - 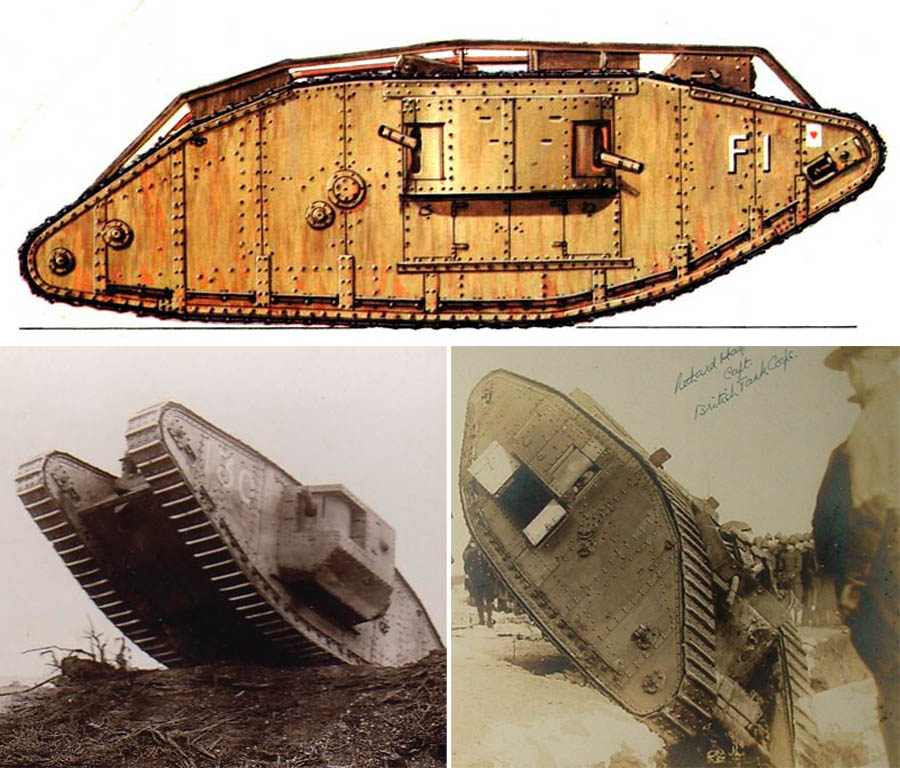 (images via 1, 2) As you can see, the tanks were getting heavier and more massive. It was only a matter of time till British Armed Forces would entertain the idea of a shell-proof super-heavy Land Dreadnought: The Flying Elephant!:

(images via) Here is an interesting Gun Carrier MK-1 version:

French Heavy Tank Monster In the meantime French military came up with the "char lourd" (heavy tank) St Chamond in 1916: 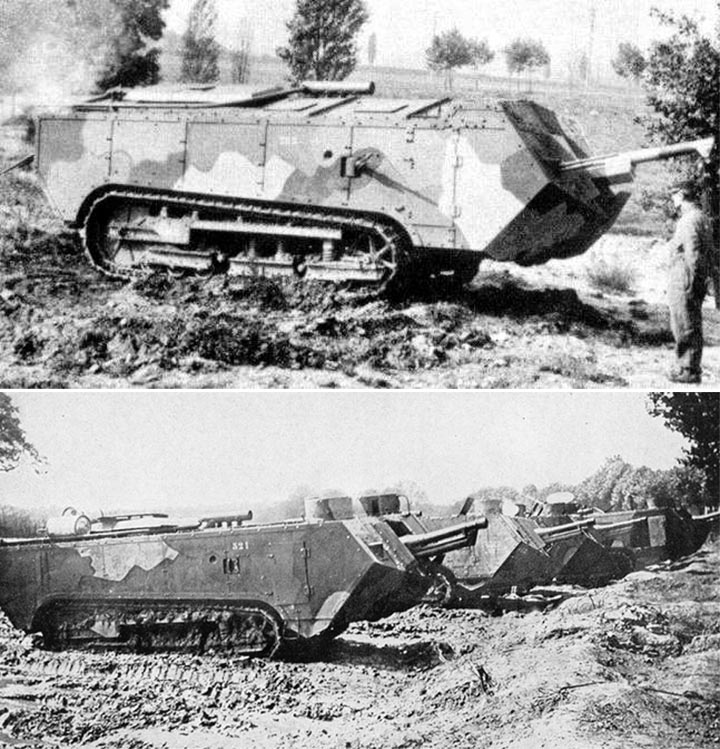 (images via) This beast (second of the French heavy tanks of the First World War) had very strange specs: it had no rotating turret and the long nose was prone to dig into the ground, which despite pretty decent speed of 12 km/h, was making it a rather cumbersome vehicle. No crossing trenches for it either, due to its short tracks and very long body. The word in the army was that "Nobody wants to serve on the Saint-Chamond"... Despite this, the production continued with a total number of around four hundred tanks made. German Intimidating Offerings The famous Treffas-Wagen machines (well-known in steampunk and gaming circles) were essentially armored steamrollers or tractor engines with a shooting platform on top:

(right : model image via) Near the end of World War I Germany introduced the A7V tank in 1918 (the only tank used by Germany in WW1 operations). British forces respectfully called it the "Moving Fortress": 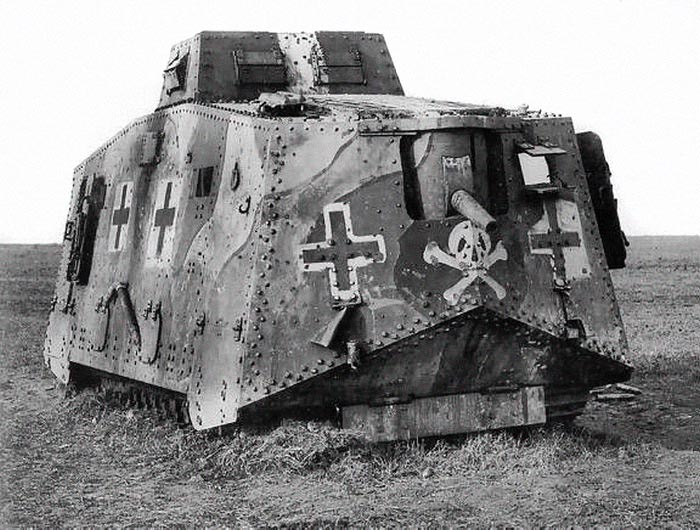 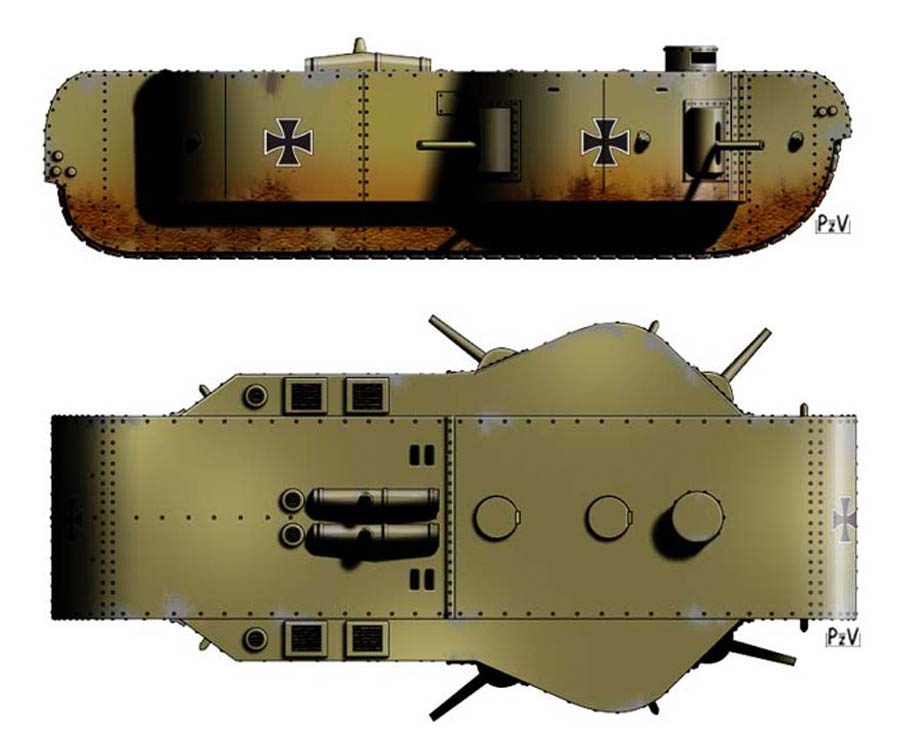 (image via) Last but not least, strange Italian battle machines. Here is a Carro Armato interpretation of the wheeled armored vehicle, capable of crossing trenches of reasonable depth:

(on the right is Italian CV-35 tests in 1940, via) The Battle of Verdun in 1916 (among other First World War photographs) from the pages of the LIFE Magazine: 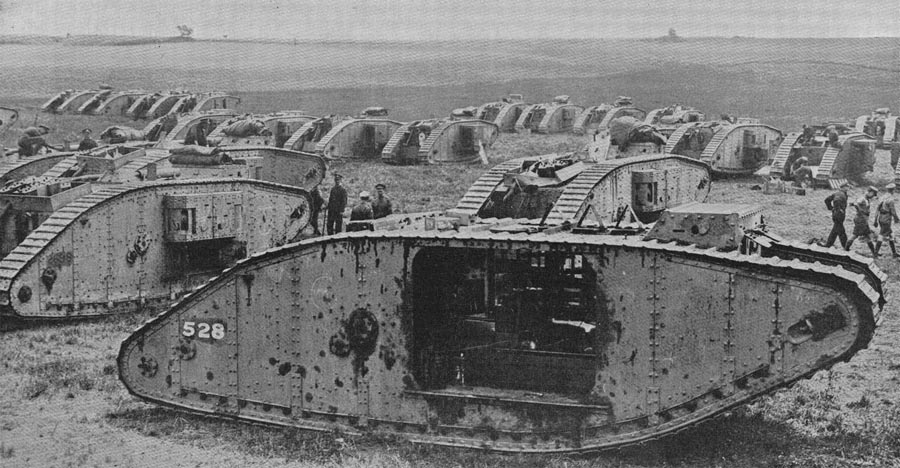 (images via LIFE magazine) On the left image below is weird and inappropriately "cheery" depiction of the tank in action - and on the right is a significantly more realistic painting by John Hassall, showing pain and suffering on the Somme battlefield. "By the time the Battle of the Somme ended, there were over a million casualties on both sides, with over 300,000 killed or missing".

(right image: The Collection Art Archaeology in Lincolnshire, Usher Gallery, left: via) Other (Mostly) Imaginary Steel Leviathans The imagination of reading public was fired up pretty early: consider this sketch made in 1906 of the "Lethal Armored Vehicles" featuring egg-shaped streamlined armor: 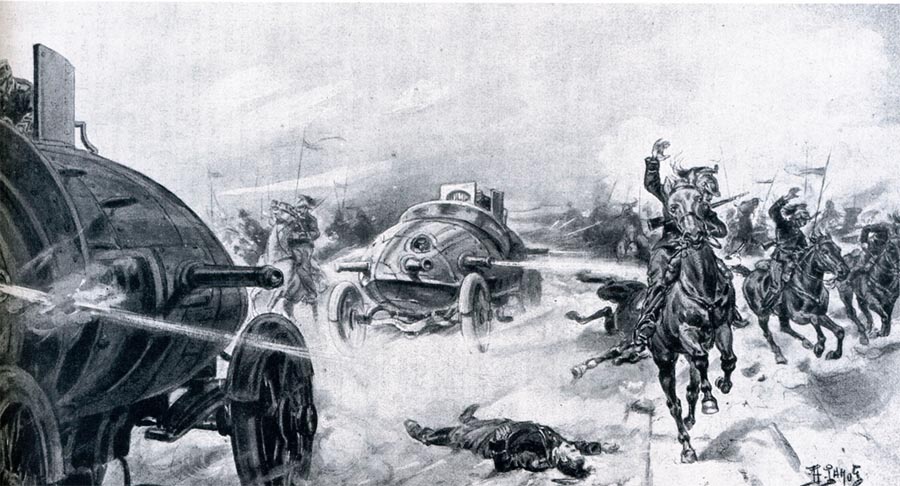 (images via) The readers and editors did not spend much time mourning over the "impending passing of the United States Army’s most romantic unit, the mounted cavalry". Horses were definitely too slow for modern warfare, and cavalrymen of the future were expected to ride their gasoline steeds (new tanks) into battle. 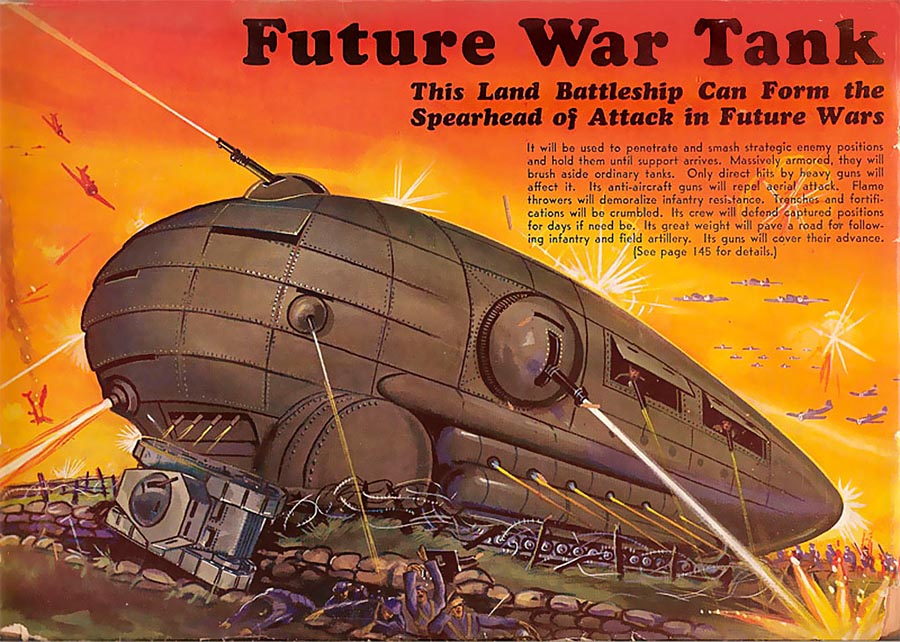 More modern approach, this is a tank design for the "Nadia: The Secret of Bluewater" (1991, Japan), and the tank concept from the WarHammer game universe: Land Raider Proteus (see more):