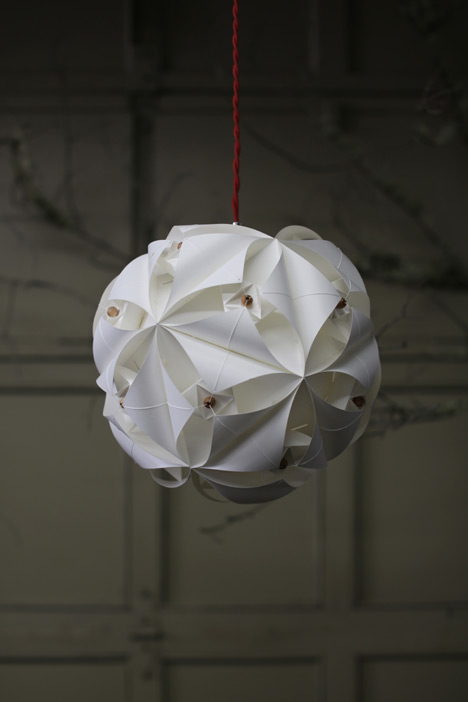 After she graduated from Syracuse University in 2005, Christine Price Hamilton spent several years working as a project manager/designer at a residential architecture firm before setting out on her own—or rather, as one of the independent studios at Fringe Union in Somerville, Massachusetts. Since 2011, she's been developing the Tesselight, as well as her freelance architectural practice, with the support of her fellow Fringe members. 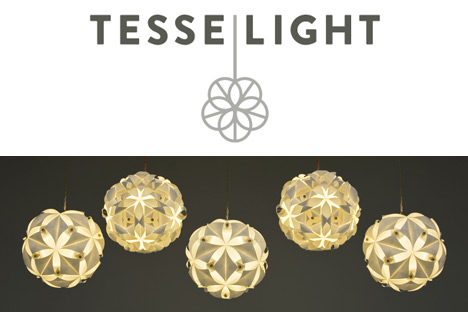 Launched last week, the collection of pendant lighting fixtures are made from delicately assembled translucent paper that has been "sealed with a proprietary flame-retardant and stain-resistant coating, silkscreened by hand to achieve a perfectly smooth, satin finish."

The paper is fed through a traditional windmill press equipped with our custom wood block dies. As the paper is fed through the press, the dies stamp out a series of flat shapes that together create the pattern for each Tesselight. The flat pieces then go to the worktable, where they are folded, curled and sewn by hand into a series of triangular tiles. The tiles are joined to create a spherical shape so strong that it supports itself, no inner frame necessary. 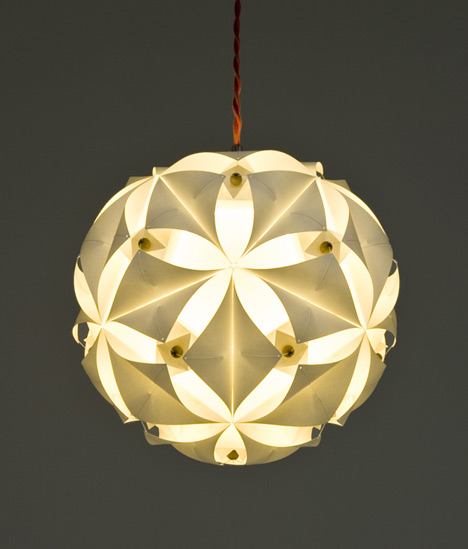 The "Atom," pictured above and at top

We had the chance to talk to Hamilton about bringing her project to life.

Core77: What inspired you to create Tesselights?

Christine Price Hamilton: Through an admittedly nerdy obsession with Buckminster Fuller, I became fascinated with fractal geometry and the Platonic solids. I was curious to see what kinds of patterns would emerge if the faces of those solids weren't strictly flat and linear, and it seemed like the pliable and translucent properties of paper made it the ideal material to render those patterns most dramatically. I was really just experimenting. I made the first set of tiles without having any idea what the end result would look like, or even that it would be a light fixture. That first experiment became what is now called the Stella pendant. 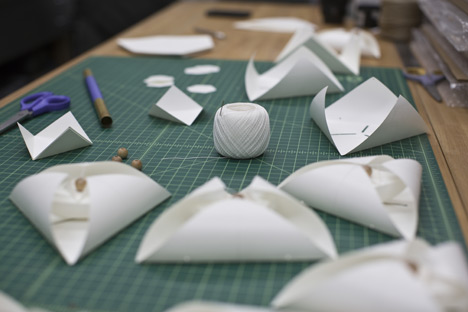 I imagine it took some time to refine the product and process behind Tesselights. What were some of the challenges you faced, and what solutions did you arrive at?

The biggest challenge so far has been figuring out how to pack and ship the fixtures. Each curve of paper is held in delicate tension by a single thread. Prolonged pressure on the fixture—even from packing peanuts—will squish and warp those curves, ruining the overall symmetry.

Ultimately, the best solution was to use the laws of geometry to our advantage. Tesselights are now packaged using a single chipboard insert which, through a series of voids and folds, mimics the edges of the fixture's form and squeezes gently between each tile, effectively suspending the fixture inside its box. 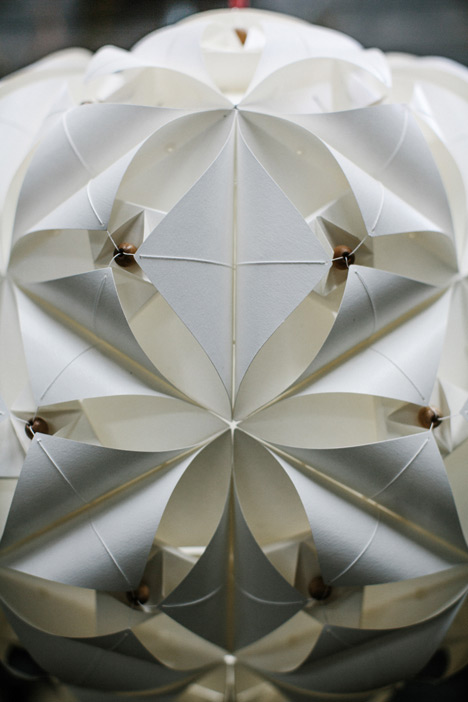 It sounds like it was a team effort to realize this project. How did the collaborative/coworking environment of Fringe Union facilitate these connections?

The initial fabrication process was incredibly time-consuming, so much so that it really couldn't be considered a viable product. I knew it could be done faster, but without a manufacturing background, I really didn't know how. Mike Dacey, owner of Repeat Press, introduced me to the wonders of die cutting and now every piece is perfectly cut and creased before it even gets to my work table. Aaron Panone, industrial designer and co-creator of Cuppow, connected me to the waterjet process and now we have custom aluminum hardware to attach our fixtures to their light sources. We've refined Tesselight into a higher-quality product that now takes 1/4 of the time to produce. From participating in the actual production to simply offering critique, every member of Fringe had a hand in making that possible. 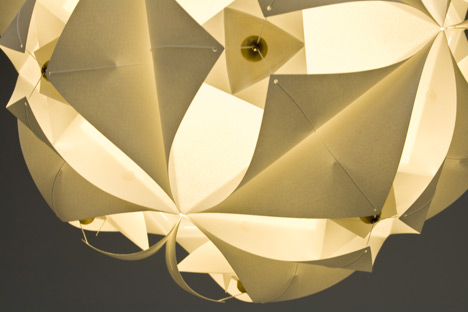 Detail of the "Atom"

Did you consider Kickstarter? I ask only because the project seems like it would be a candidate for crowdfunding.

I actually did consider Kickstarter but I was really concerned about the reward component. The more successful the drive, the more rewards there are to fulfill when it's over. I didn't want us to end up in a position where we'd have to put all our energy towards fulfilling those rewards at the very time we'd need to be pushing to keep up momentum on our buzz. With our labor-intensive product and relatively small team, the same tool we'd be using to gain momentum could easily stop us in dead our tracks.

Not to pan Kickstarter—I think it's a perfect platform for some products, just not ours. 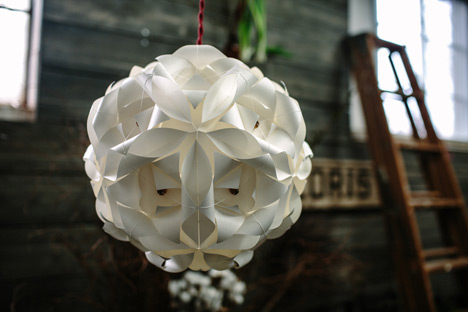 The "Stella," above and below

How do you feel now that the project has launched, and what does the future hold for Tesselight?

I'm relieved that a huge chunk of work is finished, and tentatively excited about the new chunk of work that's right around the corner. We're currently reaching out to vendors and hope to have our products well represented in lighting and furnishings boutiques across the country by Fall 2013. We're also working on table and floor models of our classic fixtures, as well as new colors and styles to add to the brand. 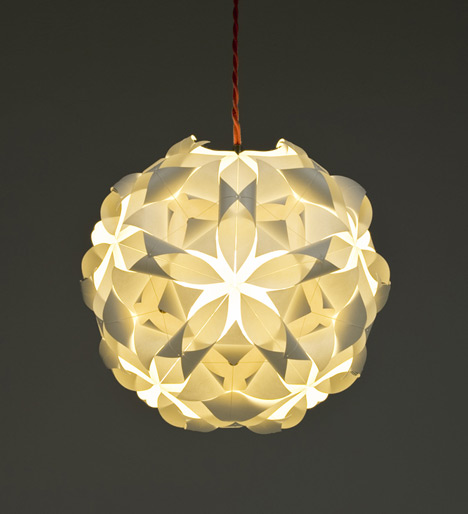 We wish the best of luck to Christine and her collaborators—check outTesselight.com for more details.