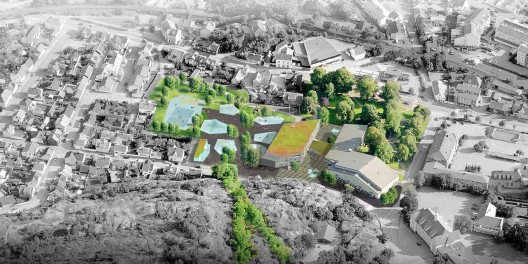 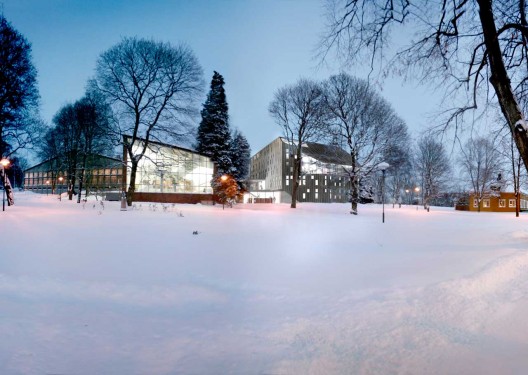 “Relativity” turns the atrium school concept on its edge. Instead of a horizontal donut, it goes vertical by tilting it on its side. This gives the central space a better connection to the world outside and creates better daylight conditions while maintaining the synergies of placing the common functions around the center. The vertical atrium connects to and creates more outdoor space for playground. “Relativity” is a 1-10 school with good internal communication and visual contact between the specialized study rooms and the classrooms. This new Hybrid between an “atrium” and “corridor” school contains the best qualities of both typologies. 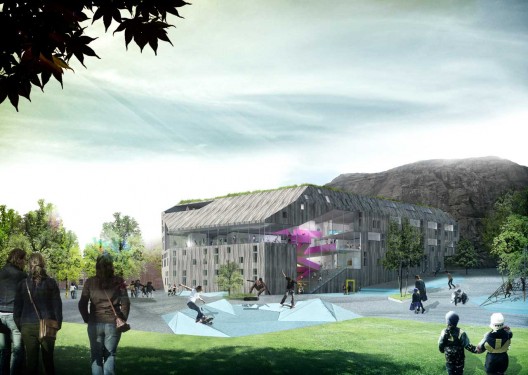 “Relativity” is a school where movement throughout the building is an experience for the senses with varied spatial experiences in the common areas. A school with a clear relationship and reference to its site. A school with an organization that is readable and easy to orient yourself in. A place where students can interact with their peers and inspire each other across classes. “Relativity” is a place where the students have both common venues for extrovert activity, and specialized spaces for diverse learning experiences and introverted study. 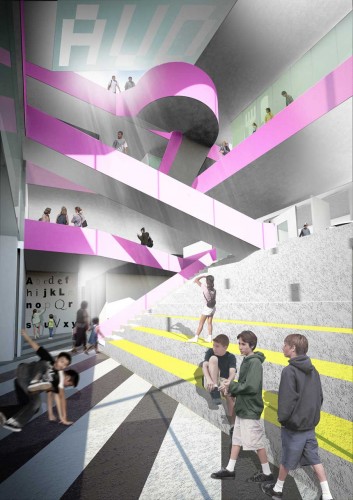 The education areas are cleanly arranged with a degree of generality that allows for different furnishings and interior concepts. In this way the teaching areas can be further developed together with the school’s faculty and staff without having to change the overall building form or concept. The flexibility of the classrooms also allows for future changes in teaching style of philosophy as necessary. “Relativity” is a school designed for classroom teaching, group work, project workgroups, and independent study. It contains a diversity of niches and workspaces that allow for short stops or long working sessions, for discussion, work, and informal meetings. The school is designed to stimulate play and experience connected to curiosity and concentration. These are the prerequisites to create a good learning environment. 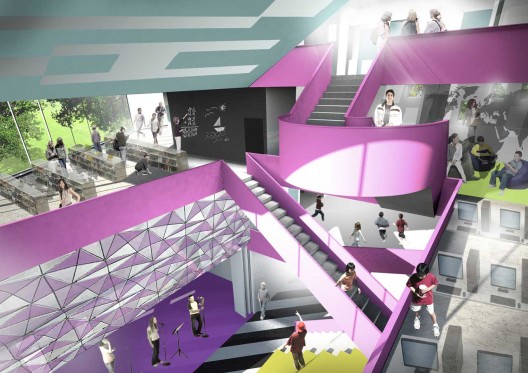 Unlike a typical atrium school where an introverted central space is surrounded in plan by functions with only light from above, “Relativity”‘s central space is placed against the outer wall to create an exciting extroverted room that contains all the school’s vertical communication and good connections to the common functions. The central room gives students good visual contact with the school’s playground area, making it also a part of the school’s inner life. The central space is not only the heart of the school, but also of the local community. The generous playground space also creates a new destination for neighborhood kids outside of school hours. 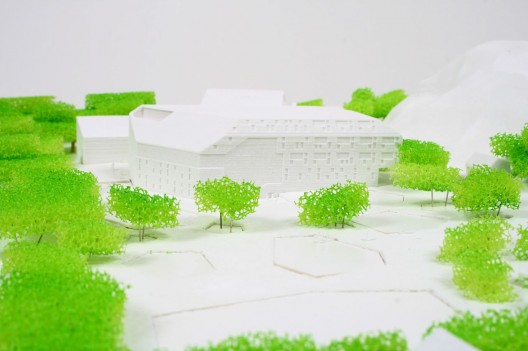 The site currently houses an abandoned concrete school building, which while structurally sound does not meet the functional requirements of a modern school. Neighboring the school is the Farrishallen, a gymnasium and swimming pool. The goal of the competition was to create a design that responded to its surroundings and integrated the new school with the facilities of the Farrishallen. Directly across the street is the Mesterfjellet rock outcropping which the new school will be named after. There is also a historical park on the south-west corner of the site which was once part of Norway’s first and largest baroque garden. 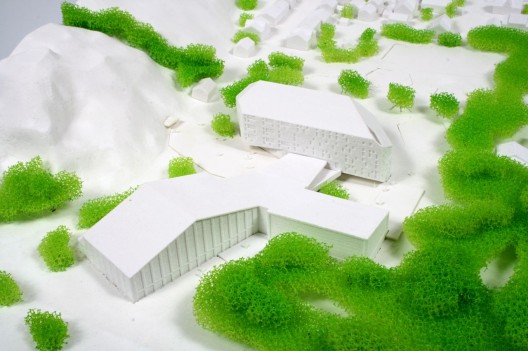 The school grounds are divided into three areas:

- Skoletorget is comprised of two stone paved plazas to the north and south which connect the school’s entrances to their surroundings.
- The playground is divided into age-related playscapes inspired by the nearby rock formations in Larvik.
- A sportspark to the east contains mini soccer fields, basketball, and an obstacle course. 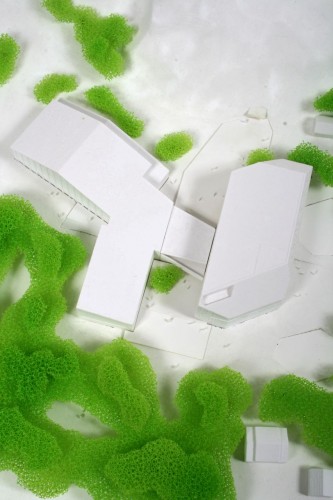 In order to create a 100% universally accessible school, the main floor was lifted to level +12.8 which corresponds with the lobby space of the Farrishallen. By ramping slightly up from the road in the north, the Skoletorget creates an entrance plaza that can be used both by the school, and by visitors who want to use the sports facilities of Farrishallen. 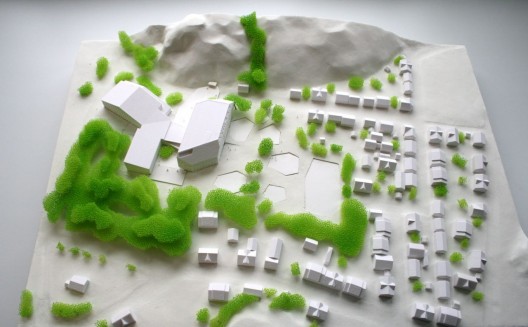 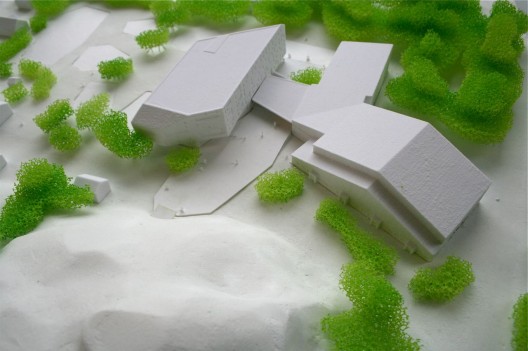 The new Mesterfjellet School is a compact, five-floor tall wood-clad volume with a green roof that relates closely to the rock outcropping after which it is named. The small footprint frees up the majority of the site for outdoor activity and play. The volume is carved and shaped in plan and section in order to reduce its apparent scale and to relate with the surrounding wooden houses. Placement to the east, close to the Farrishallen ensures that despite its height, the building doesn’t overshadow its neighbors. Compared to the sprawling existing 2-4 floor building the view and light conditions of the closest neighbors are actually improved.

Analysis of the room program and application of pedagogical principles have guided the project’s organization. Through a series of studies and diagrams the functional synergies of the school have been mapped and optimized around the vertical atrium that is the heart of the school. The specialized functions of the school are distributed around the central space to create interaction across age and grade divisions. The classrooms and group work rooms are placed to the north to create more calm of contemplative environments for learning and study. Distributed throughout the school are a variety of gathering spaces for students of all ages. 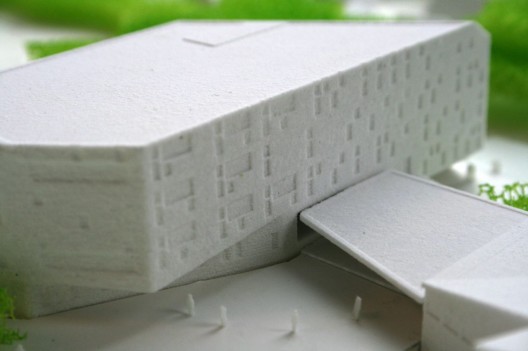 The school has a goal of achieving an Energy Class A rating through a series of active and passive features. With a minor investment it will also be possible to achieve Passive House levels.