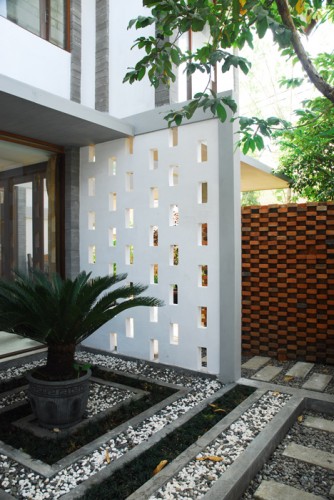 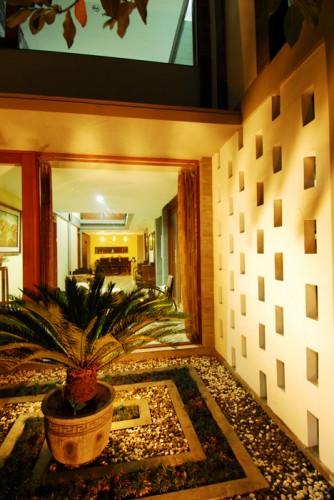 The site was 280 square metres corner site which south and east orientation, the main street on the south part. Located at housing estate which was developed by city government of Surabaya in 1980’s at the eastern part of the city. The old house totally demolished due to poor structural condition, only remain roof tile which is still in good condition as recycle material for the new one. 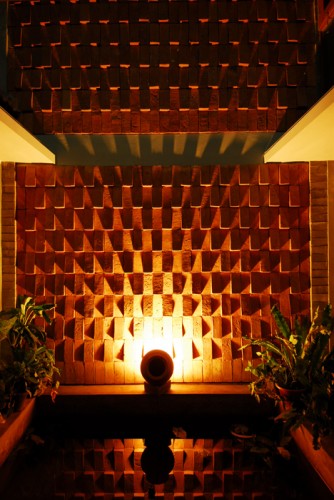 This house was planned to be occupied jointly by the owner (elder couple) and one of his son and their families. To accommodate this, the division of functions vertically into the solution. Clients as parents lived downstairs while his son and his family would later lived upstairs.

In addition, this house will be partly used for post-retirement home business and ‘home office’ for one of his son. On the side of the house facing the main road (south), designed a garage which can later serve as shops. This store has its own access to the floors above it is designed as a home office. Between the 2nd floor with a home office has a connecting door. 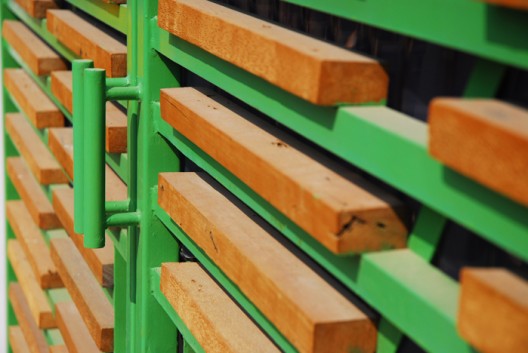 Family of the owner is a big family who often conduct routine activities together so that the necessary space to accommodate routine field, such as: family gathering, study, fasting & prayer go together etc. tarawih. Starting the front porch, living room, family room to the dining room is designed without a permanent wall that is expected to accommodate the activities of a friendly atmosphere, if necessary. To support this effort also the carport area of the east side can be used as an extension of the kitchen. 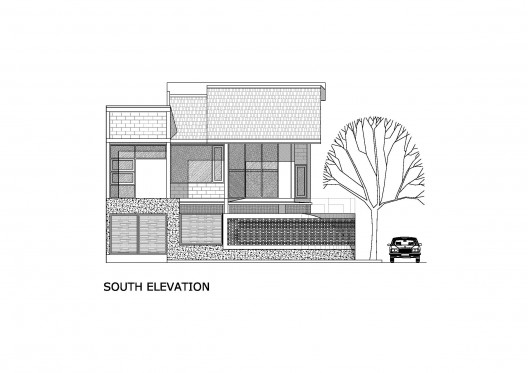 The users have many hobbies such as collecting traditional ethnic style accessories and furniture, maintaining fish, birds as well as plants. Provided quite a lot of wall as a display area is also considered to accommodate the arrangement and placement for bold thematic collection of accessories and furniture. The provision of fish ponds in addition to the natural air conditioning and as tranquilizers for the home atmosphere also a media hobbies to keep the fish of the occupants. Large green yard beside used as greenery area also it is provided to homeowners plant hobby. Concrete cantilever canopy provide shade and shadow also as space for display plotted plants on the 2nd floor. 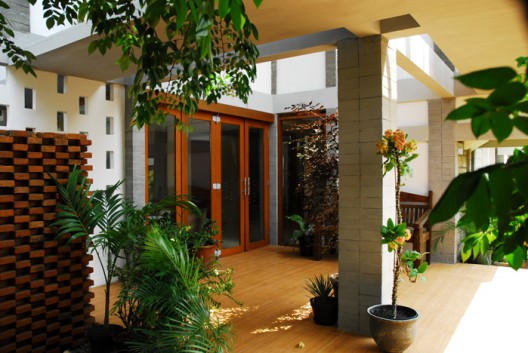 The Limitation and The Respons

Due to limited by the cost of the house is conceptualized as a ‘semi-finished house that finished’, meaning that even though semi-finished but livable and looks finished. To meet the demands of that cost is then carried out the following matters :

1. Using exposed light brick for entire wall because it was cheaper compared with red brick at final cost when it was exposed. The light brick was watertight material so it could used as exposed material for wall construction material. 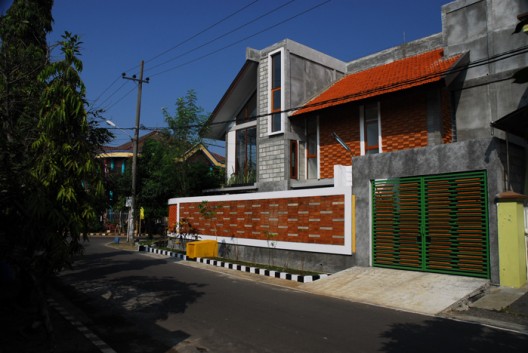 2. On the roof that is shown, reusing old roof tile as recycle material for new house. On the roof is not shown is designed using fiber-cement roofing wave thus saving the use of timber frame roof.

3. Reusing all waste timber formwork & scaffolding which is still in good condition to frame the ceiling, roof truss, railing, fencing and some furniture. Therefore, in addition to selected coconut timber are also relatively inexpensive, hard and strong.

4. Using exspose and naked material as finishing concept to lower cost of finishing and maintenance. 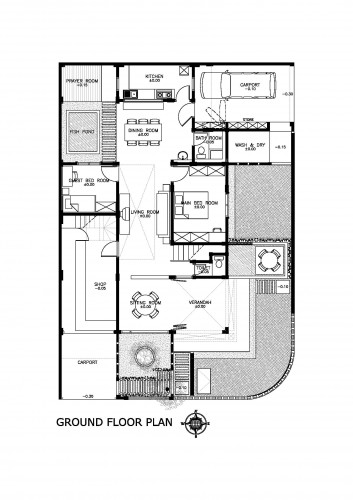 5. Due to minimize using of timber, the use of timber frame window frame only for swing window, fixed glass window is flanked by tiny timber trim that are screwed and given a sealant to keep water unpenetrated.

6. Reduce floor to floor distance effectively, only 2,88 m high and floor to ceiling distance only 2,4 m high but highly consideration of space proportion and psychological comfort of habitable space.

7. Using fabricated building materials in “wrong way”, beyond it’s default determined function, such as concrete-gray luster which is played as exposed formwork concrete column mold, and terracotta luster as a material for perforated wall with a reverse positioned from it should be. Brick which is used as stone wall decoration, which is much more cheaper than other natural stone.