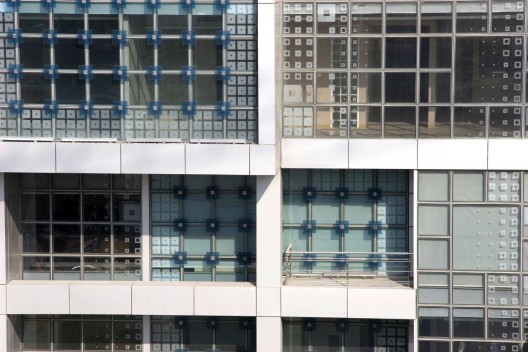 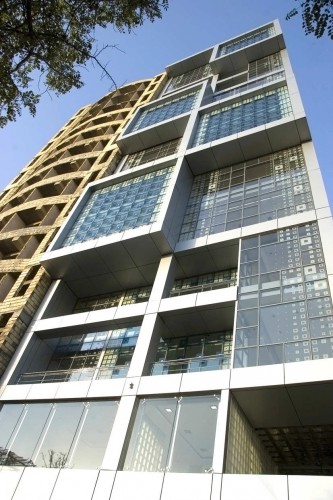 The concept of project windows is derived from the idea of traditional Iranian windows (Orosi). These windows consist of small colourful modules of glass that control the intensity of light penetrating inside and create a colourful light and shadow on the inner surfaces.

As the building is narrow in width in comparison to its height, the whole complex is divided into several parts in width and height to gain a balanced proportion. Therefore an initially gained rectangular module is composing the whole form on the main façade. These modules are conveying functions such as the entrance, office and commercial units. Our next task was to design a texture on this transparent façade and the containing modules based on the concept of expanding geometry; an Iranian architectural concept in which one module becomes a base for the formation of a whole complex. 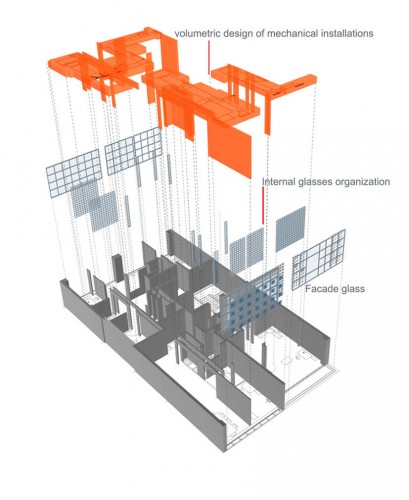 The Idea of Dynamic Urban façade

Light is a significant variable in the facade design of this building. By using the transparent and semi-transparent textures on the glass facade we were able to create different qualities of light with various reflection and angles in the night and day. The night light was also modified through using the artificial lighting system that is in harmony with the form of the building and magnifies the dynamic urban views. 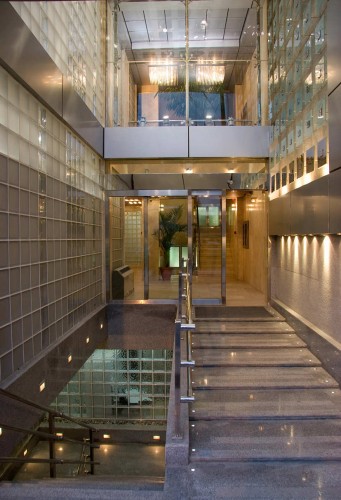 Through using this modulation system and the facade design we tried to bring an Iranian theme in interior space with the effect of shadows and turquoise reflection of the modules installed on façade. This effect is always being felt even when the semi-transparent blinds are closed.

The north and south façade of the building contains two transparent layers of material. The first one includes the same size rectangular modules that are installed with small steel rods and includes the main windows. The outer shell is a 30 by 30 glass module that is covered with sky blue colour inspired by Iranian architectural theme. This outer layer not only brings a colourful effect of shadows and lights inside, but also creates a thermal and light shield for the sharp sunlight of the southern façade. The inner layer of the facade in some parts transforms to a semi-transparent layer that is textured by double glazed windows with sand blast modular patterns on inside. 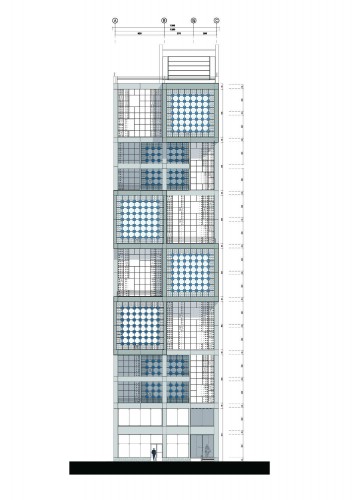 Overall, the main goal of this material combination was to reduce the temperature gained by sunlight about 40%. This climatic need is also modified by using the Sun Energy type of glass windows.

Site is a 13.5 m by 20 m rectangle in total 16 stories. In this project building two underground floors are allocated to mechanical and service rooms. Ground and first floors are dedicated to commercial units and the upper 12 floors are the official units. 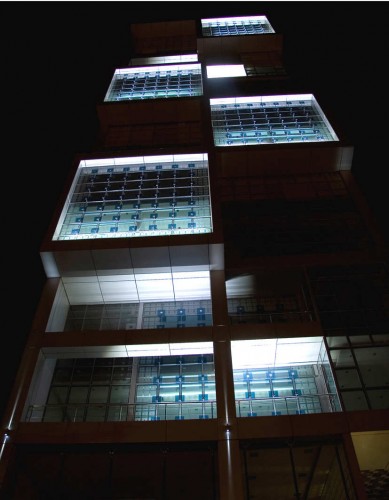 The client was eager to have different types of office units with the areas ranged from 50 m2 to 120 m2 .This requirement divides each floor into 2 up to 4 units designed with different areas and facilities but regardless of interior quality of space.