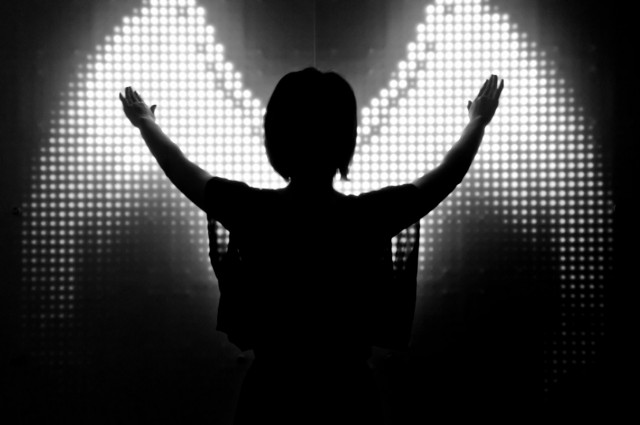 “Ice Angel” by Dominic Harris and Cinimod Studio is an interactive artwork that provides the participants a glimpse of themselves depicted in angelic form. Inspired by the way children create snow angels in fresh snow, Ice Angels introduces the digital twist of being a performance portrait device that pairs the participant to their angel identity.
The installation is experienced through the participation of the viewer who adopts the role of performer. The viewer becomes the subject of a living portrait, with their hidden “angel” revealed for all to see. As the user moves their arms a new wing shape appears, unfurling from the shoulders, creating the angel traces within virtual snow. The wings are created dynamically and are linked to the participant, creating a performance proportional to the user’s physical extents. The installation has a ‘memory’, capturing a hidden view of the participant and their angel wings, and this specific angel identity remains linked to that participant in any future encounters with the artwork.
The merging of the mythology of angels and the natural phenomenon of light travelling to earth creates an intriguing intersection. An angel’s form is inherently human, yet an angel always originates from elsewhere. In modern terms, light is our messenger, as telescopes use light to capture new aspects of the universe. It is with this symmetry that Ice Angel exists, but the artwork itself is defined by the interaction it creates.
The artwork is a wall mounted structure with overall dimensions of 2.7 x 2.7 metres, and just 10 cm thick. Mounted upon a laser cut steel framework it comprises 6,500 individually controllable pure white LEDs arrayed behind a thick frosted acrylic surface. A mirrored plinth sits in front of the piece, elevating the performer above the onlookers. Contained within are weight cells used to help generate the biometric tracking of the user. Additional user tracking data comes from a discreet Asus Xtion Pro camera mounted overhead providing a plan view of the participant. 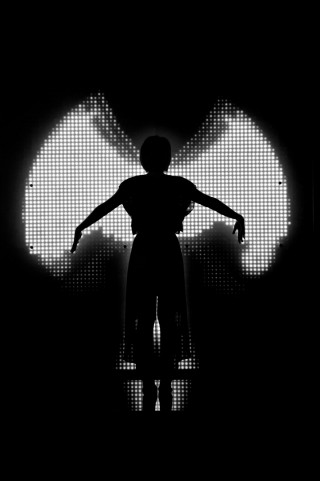 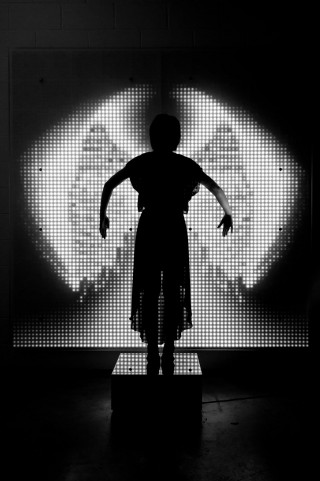 The main software was developed in C++ using the Cinder framework. It is a bespoke application that combines the tracking module, the wing generation module, and the wing design module.
Data from the overhead depth camera, an Asus Xtion Pro, is used to detect the participant’s movements. Using a front camera would have been significantly easier to code, but would have presented an unacceptable obstruction to the experience. By tracking the height of the person’s head, and the distance and height of their hands, the software rebuilds the human skeleton based on standard human body proportions.
As the participant steps up on the plinth they must first create their angel wings by raising their arms. Biometric profiling pairs the participant to their specific wings set, allowing a magical ‘repeatability’ to the artwork in which they will forever be depicted with the same wings during repeat encounters with the artwork. The smooth wing movement is a function of sophisticated inverse kinematics with the wing designs, in which individual wing segments are linked one to another to create the natural movements. Motion blur and fluid dynamics are used to complete the overall visual output.
Ice Angel premieres at the Design Days Dubai fair in Dubai (March 2012), and is being presented by gallery Priveekollektie along with the Flutter and Phable artworks.
Credits
Artwork by Dominic Harris
Designed and produced by Cinimod Studio
With additional programming by Andrea Cuius 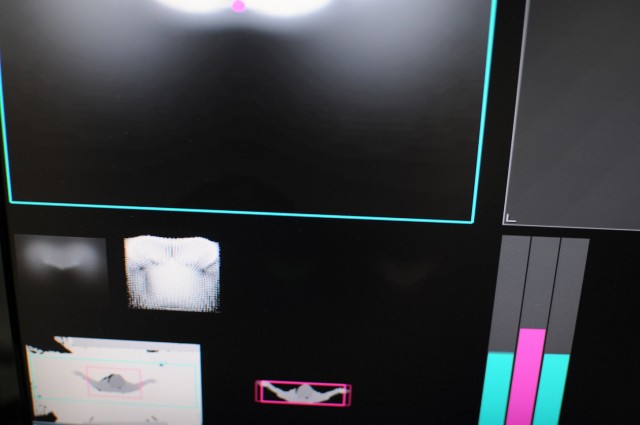 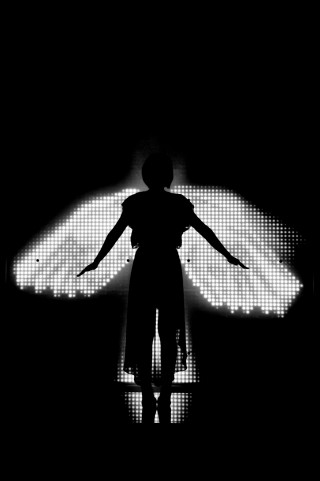 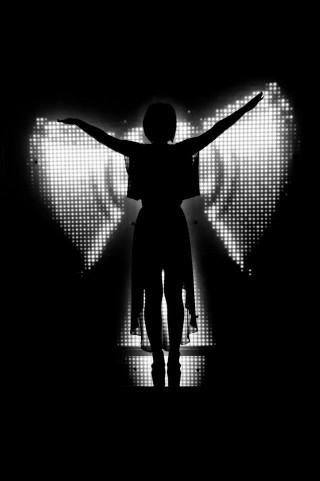