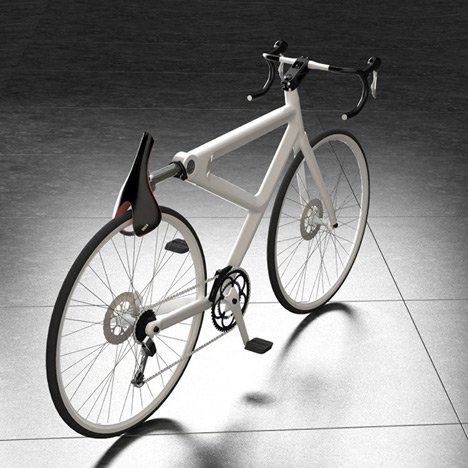 Not to be a hater, but my number one concern with the "Saddle Lock" concept by Lee Sang Hwa, Kim Jin Ho and Yeo Min Gu is that it's a design for not only the seatpost and saddle but the frame itself. The fact that the hinge is incorporated into the seatpost cluster means that the locking mechanism is part and parcel with the frame itself, seatstays be damned. That said, the Red Dot Design Award-winning concept illustrates a commendable bit of lateral thinking, so to speak, in integrating a locking into the seatpost, which flips between the standard upright position and a lowered, secure configuration.

In complex cities, the number of people using bicycles to travel short distances is increasing. Following the trend, bicycle design has been evolving rapidly. On the contrary, the evolution of the bicycle lock has been slow. When they make a quick stop—such as at a coffee counter or a convenience store—people still look for something to lock their bicycle to. Even though they are only stopping for a few minutes, they must perform quite a number of actions to lock their bike.

Saddle Lock provides a way to quickly lock the rear wheel without the need for additional locking accessories. The seat post swings down around the main frame when a button is pushed. The saddle features a cut-away shape that allows it to sit over the rear wheel. A combination lock allows the release of a special alloy rotating lock that extends from one end of the saddle to the other, securing its connection to the wheel. 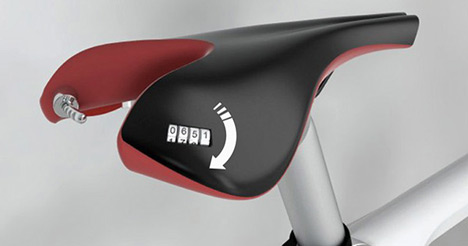 Stateside cyclists will be quick to note that locking the rear wheel is hardly sufficient for the mean streets of NYC or SF, but that's not the point: The Saddle Lock is a variation on the built-in handcuff-style wheel lock that is commonly seen on imported cruisers and e-bikes, a simple solution for less-larcenous locales. 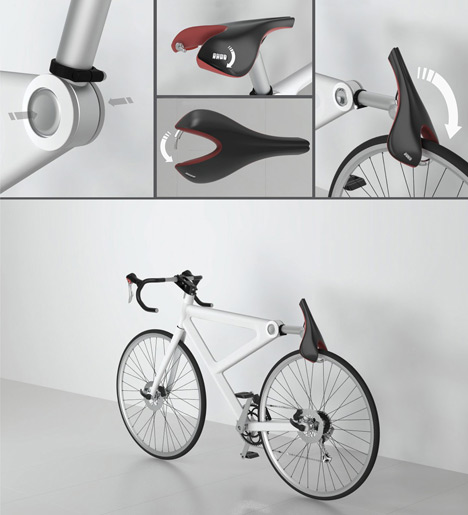 Additionally, it's worth noting that the space between the seat tube and the rear wheel forms a closed loop, which means that the Saddle Lock could lock around the horizontal part of a bike rack or affixed railing. Maybe the Korean team should team up with the fellas behind nCycle, which featured a similarly concealed lock design in the handlebars, for maximum integrated lockability... 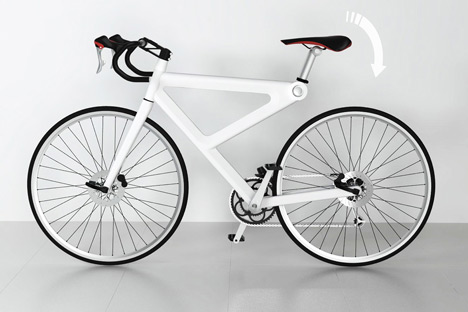 Still, I don't know if I would trust a seat that is expressly designed to flip downwards—it's bad enough to accidentally twist a seat when the bolt isn't tight enough—and I imagine that the hinge wouldn't remain entirely stable (or stiff) after prolonged stress. The diagonal bar, on the other hand, strikes me as a purely aesthetic touch, and while it emphasizes the locking mechanism—also at the expense of the structural integrity of the frame—I'd prefer a traditional seat tube and seatstays any day.

Via URDesign; thanks to Neil for the tip!