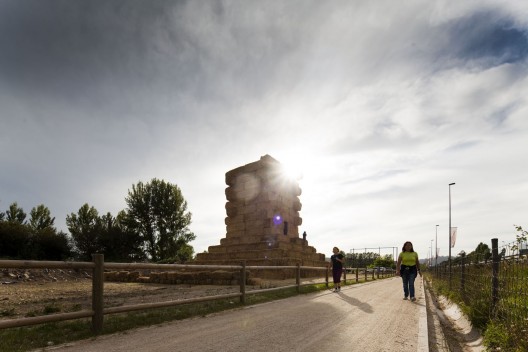 As one of the winners for the international competition, “Performance architecture”, the agriCultural Mountain project by Group IUT (Nuno Miguel Lima Cruz, Bruno Martins Afonso Gomes, António da Silva Lopes) explores the paradox of an ephemeral monument creation. It´s an artificial mountain placed at the city outskirts, outside the dense urban core, at an agricultural area called “Veiga de Creixomil”. Cultural activities are mainly urban happenings. Rural people and rural areas are usually outside the mainstream circuit of the cultural industry. This proposal aims to bring the cultural phenomenon to the agricultural realm. 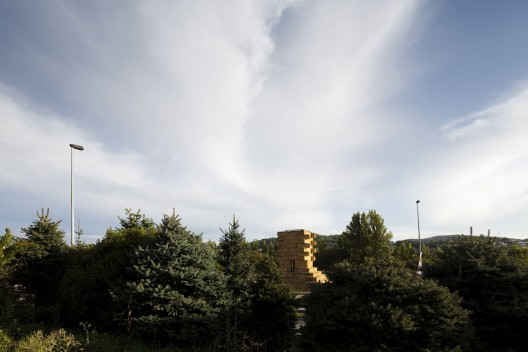 The competition was aimed at choosing proposals for five temporary urban interventions in the scope of Guimarães 2012 European Capital of Culture. The competition intended to draw up architectural and urban strategies that, in reactivating performance art approaches, provided new directions as to the roles of architects, artists and designers in the urban context. The competition selected multidisciplinary teams proposing temporary concepts and structures that would stimulate the appropriation of controversial public spaces by the city inhabitants. 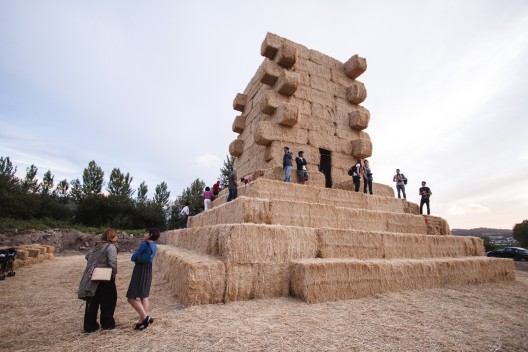 The Veiga de Creixomil area represents a microcosm of the Ave river valley diffuse city, where Guimarães is a center piece, characterized by a great dispersion of the urban settlements, creating a blurred distinction between the urban and the rural areas. It is located in the only uncultivated terrain of the region, next to the highway access to Guimarães, highly visible by the city visitors arriving by car. 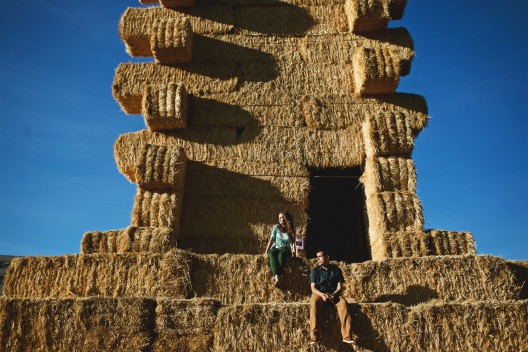 The proposal distinguishes itself from the immediate surroundings by its vertical scale (12,70m height) in opposition to the horizontal plain, producing an immediate impact to the public as soon as they arrive to town. It has a wide base, like a ziggurate, that narrows up into a tower with salient corners. The intervention wants to be a landmark, as the ancient Guimarães Castle tower is, but also wants to be visited and conquered, instead of a military defensive fortress. It is an invitation for the public use, to climb it, seat and rest. The scale is big and almost superhuman, forcing the visitor to touch the straw and escalade. The interior space is appropriate to small events and a quiet space to lounge. The outside space creates a natural auditorium suitable for wider audiences and to enjoy the view. 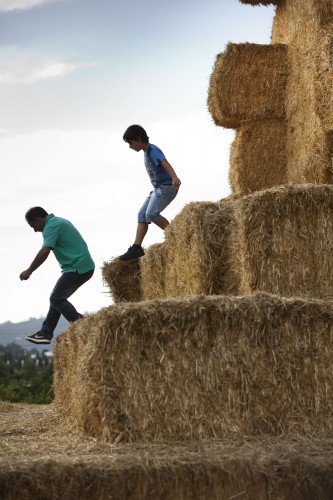 This pyramidal volume was built just by piling up a total of 288 big size straw bales (2,80×0,90×0,80m with 300kg each) around a guiding thin metal structure with no other structural function than supporting the interior elevated floor. The construction is stable to vertical loads (gravity) taking advantage of the geometry of the proposal and the good compression qualities of the material. The stability to horizontal loads (wind or earthquakes) is guaranteed by the squared shaped plan with four close corners and the straw bales assembly system allowing a completely locked structure with no need to use mortar or other reinforcement. 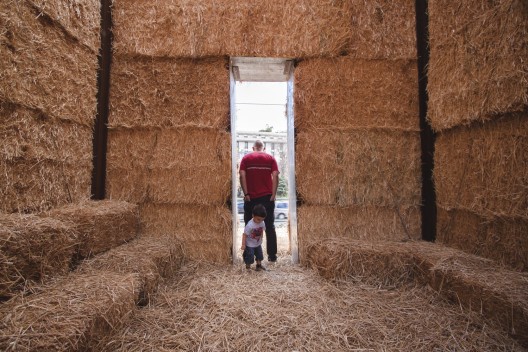 This is a rather unknown construction material, inexpensive and totally reusable. This intervention, notwithstanding its volume, left no trace in the landscape and no waste afterwards. The idea was to reinvent a temporary usage for this raw material the fields produce. After the temporary exhibition period all straw bales were reintroduced for consumption by local horse breeders.